Topic: I have nine Bettas in a 10 gallon aquarium and I can never seem to find them sleeping. Even if I turn off the light and sneak in the room it still seems I can’t find them sleeping.. When the heck do they sleep? Or what do they look like? Just kind of wondering if my fish are healthy and are actually sleeping when I never see them sleep… Should I have a schedule to turn my lights off or just leave the lights on all the time?

*Awarded Answer
Posted by Julia Quinn:
Beta fish are very calm and are very light sleepers. They usually can sense movement around even though there are eyes are closed somehow. They make these plastic leaves to put into your betta tanks that are designed for your fish to sleep on. They are called betta hammocks. Here is what they look like

I’ve given some thought and did my research on this one for you. I had some spare time to burn so hopefully this helps you some. And yes you should turn your lights off on a regular schedule. What helps regulate that is buying a timer at your local hardware store that does this automatically. Here is a picture of some. Basically it plugs into the wall and then plugs into your aquarium light and it switches the light off at your certain set time everyday. 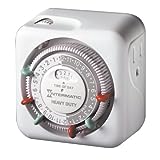 Sleeping In Plants
But as far as sleeping they usually like to sleep in plants or somehow have something along their side to help hold them where they are. Their scales help hold them inside of plants can just sit there for a very long time without any movement.

Sleeping Inside Decorations
They love to sleep inside of tank ornaments and especially tube like shapes of ornaments. So if you’re picking out things to put in your aquarium as decorations I would advise to use some small ornaments that are around because they love to lay in there and sleep at night. 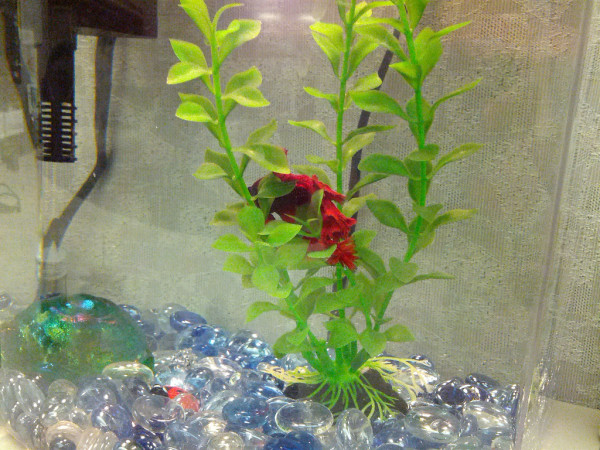 Sleeping On Their Side
You will also notice that they sometimes lay on their side a little bit almost like they look like they’re not alive or dead but they are actually sleeping. I think that is because they have to not be moving to sleep and if that’s what it takes then they will just lay on their side. I have come into the room numerous times to catch them on their side and I think their dad but then I go to make a lot of movement around them and they get up and start moving around as if they were sleeping because I work.

Sleeping Top of Water
These fish are always coming to the surface for air so you will notice that they sleep at the top of the water most of the time. They love to lay inside of plants and kind of just loiter around atop the surface when I can just grab a quick gulp of air.

Plus I’m pretty sure it’s easy for these fish the float because if you’re breathing that there’s a hair inside of your lungs you would think or they would have a tendency to float but maybe I’m totally wrong on this one. You want to make sure the surface isn’t too agitated with movement from your tank filter because this can stress the fish out.

Posted by Frank L.
Of course they have to sleep but you knew that.. Right? All animals and living things need to sleep and that means that your Bettas sleep. Do you remember when you were in high school and you mastered sleeping while almost looking like you were still paying attention?

That’s a lot like what fish do. They don’t change much to sleep so its pretty tough to see them sleeping. But I do know what you mean because I have so tried to catch them sleeping but I couldn’t see them sleep.

Posted by Johnathon S.
I’ve come to the realization that I will probably never find my beta fish sleeping because they seem to be so on top of any movement in the room that they see me coming before I find them sleeping. I thought about sneaking in there with a flashlight and just shining it on them when they’re sleeping in the dark but maybe that would be a little mean and somewhat disturbing for that. I know that they have to sleep anyways So that wouldn’t be alive because all living things have to be alive so I guess it’s not huge deal if I don’t see them sleeping.

Posted by Frank K.
I don’t see what the big deal is of seeing your fish sleep when you know that they do. Just put it behind you and just forget about it because you know that they have to sleep in order to live so you know it’s occurring. I often wondered this myself but now I guess I have an answer. I was just leaving the light on for weeks on end.. glad I found this article because that was unhealthy for my little guy. The timer absolutely took the hard work out of having to remember to turn the light on and off every single day and my office (that is where my pet is right now).

Posted by Amanda W.
I have found my fish snoozing on many cases. I never turn my light off so the fish kind of have to learn how to sleep with the light on and they get more used to sleeping with light on. Mine sleep on the bottom on their bellies and I see them do it pretty often. It’s kind of funny to walk up to them and realize they are almost laying on their side. Fish are kind of funny when you catch them in the act of it because they look almost frozen in time and on multiple cases I have though my fish were dead and not alive. But with a little movement around them… I RUDELY woke them up. Now I am educated on this manner. Great post here. /best-food/

Posted by Nathan H:
This makes me think that I should give my fish some plants if they like to lay in them while snoozing. I prefer my tank to be as wide open as possible and almost have that future look of bare essentials but.. I might change it just so the little guy can grab some zzzzzz’s. Maybe that’s comparable to my wife saying I can’t snooze on the couch.. such a scary thought.