Topic: My family has a new Betta fish and I was wondering do Betta fish bite hard? My mom seems to think that we should be watching our fingers around the fish because he is a “Japanese fighter fish”. I told her that it can’t hurt us but she still doesn’t believe me. I’m asking this question to reassure her. Can other fish owners help me to get her to understand. 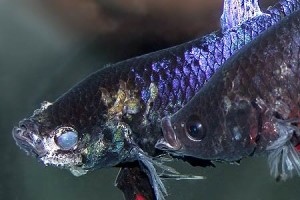 Most people don’t know this, but Betta fish do have small teeth. Even though these carnivores are called the fighter fish.. they aren’t large enough to harm our human skin. You will maybe see a mad male Betta come after your finger but he can’t break the toughness of human skin. Not to mention his strength of force is so little when compared to the human size of our body.

You can tell your mom you guys are completely safe around your Betta. You can tell her, “hey mom what do you think these are piranhas or what?!” Haha just kissing around but yeah that’s funny. You have to remember its your moms job to care for you and watch over you every waking second. I’m a mother of 2 and totally understand where she is coming from.

Posted by Natalie Riung:
The worst thing I could happen is your beta fish is going to bite down on your finger and their teeth might stick and your skin a little bit making it seem like the fish will not let go but indeed it is actually stuck. This has happened to me a couple of times and I was actually trying to trigger an attack so it was my own fault and I cornered the fish in a corner so it had no choice.

Basically what I wanted to do was test the fish so that I knew how aggressive it would get around my children and the bite really didn’t do anything whatsoever. The main thing to watch is having the fish stick inside of your skin but still it is not going to hurt anybody because they cannot penetrate the skin.

Posted by Riley S:
No offense but this seems like kind of a stupid question to me. It’s almost the equivalent of asking if a small worm could bite you or a small minnow for that matter. Mean to offend but it just seems somewhat stupid to me to ask this question.

Reply from Sarah E:
You have to remember that we have young adults around this hang out as well so you probably should just keep your mouth shut if you nothing good to say. We are constantly getting new people around here and beginners have all stages of questions so it’s good that we cover all grounds as far as answering questions for beginner aquarium owners. This topic wasn’t in the archive so it’s important to post all grounds to help other people out there.

Posted by Rachael T:
I agree with helping all questions because somebody has this question there probably 10 other people out there searching for it as well. Just because you think the question is stupid doesn’t mean we care about your opinion no offense.

Reply from Mason Braeche:
I think it’s a very adequate question because that’s the reason I came to this topic and I for sure I’m not stupid. I’m going to ask my opinion inherent tell someone stated that this was stupid so now I have to get take it personal because I the same question myself today. Betta fish do not bite hard.. maybe a nibble but that’s it. To your knowledge a lot of fish that are very small pack a large punch and they can really sting you and Sonia and have tocsin so we have to cover all grounds with her children.