It’s no fun when your fish is suffering from a sickness. There are times when we can help fix our fish and times when.. we just can’t diagnose the problem properly. I’m sharing this guide I found on mybettafish.org so I didn’t write it.. but it’s a great help guide. Having a sick betta is one of the worst feelings and I don’t wish it upon my worst enemies. 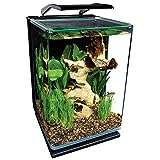 Bettas, also known as Siamese Fighting Fish, are a popular choice and a frequent sight in their individual bowls in pet stores. For a fish with such a fierce name, however, they can be surprisingly fragile and susceptible to a variety of betta fish diseases. Fortunately, most problems that lead to a sick betta can be prevented with diligent proper care and a carefully maintained healthy environment. Knowing the symptoms of the most common betta diseases is the best way to catch any problems that do develop as soon as possible to keep your betta fish alive.

For a new tank, a tank with a failed filter, or one that has recently received too large a number of new fish at once, ammonia poisoning is possibly the most common cause of illness for fish kept in tanks. Whichever the specific reason, ammonia poisoning is caused by unhealthy water conditions. Its symptoms can appear soon after the problem occurs, or can develop slowly over days.

Fish gasping for breath, or seeking air close to the top of the tank and at the water’s surface, is one of the clearest signs of ammonia poisoning. In appearance, they may seem to be bleeding as their gills change colors, becoming red or light purple. As with other betta fish diseases, it can also result in extreme lethargy, with the fish lying at the bottom of the tank with closed fins.

To treat ammonia poisoning, the tank’s pH level should be lowered below 7.0 and up to half the water should be replaced by aged water. Reduced feeding will lower the amount of uneaten food soiling the water. A chemical that neutralizes ammonia can be bought at pet stores and should be used.

Ick is one of the more contagious betta fish diseases that is unfortunately easy to introduce to any fish kept in a tank. It can be brought in with new fish, new plants, or be present in live frozen food. A sick betta can be avoided by properly treating water with aquarium salt.

The most visible sign of Ick is the appearance of small white dots, which is why Ick is sometimes also called White Spot. Signs of itchiness, with bettas attempting to scratch against sturdy surfaces, are also common. In advanced stages lethargy occurs, followed by bloody reddish streaks and then death.

Unlike other betta diseases, when parasites such as Ick are present it is better to treat the entire tank than to isolate the affected fish. If caught and treated promptly, a tank stricken by Ick can be cured and the fish can recover completely. The tank’s temperature should be increased to 85 degrees Fahrenheit and the proper amount of Aquarisol should be added to the tank daily. When a tank is too small for a heater, a complete change of water is in order, with Aquarisol and salt added.

Another of the potential parasitic betta diseases is Velvet. As with Ick, it is easily prevented with regular inclusion of aquarium salt in tank water. It is also highly contagious.

Signs of itchiness are present with Velvet as with Ick, however, the main difference lies in the appearance of the sick betta. Instead of white spots, it will have an appearance of rusty, gold, or coppery dust sprinkled over its body. This is more readily apparent when a flashlight is directed at the sick fish.

When one fish has Velvet, the entire tank is at risk, and so it should be treated. Either drain the tank and rinse it thoroughly after washing it in a solution of copper sulphate, or use a product such as BettaZing.

Popeye can be one of the more disturbing of betta fish diseases to witness. A condition caused by unclean tank conditions, this disfiguring betta disease can also be symptomatic of deeper underlying causes such as tuberculosis, in which case the result is fatal.

As its name suggests, the main symptom of popeye is the bulging out of one or both of the sick betta’s eyes. Within a week, this can be so grotesque as to seem incurable, but full recovery is still possible if the underlying cause is not terminal. When caught early, it can often be healed with aggressive treatment.

A full water change is the first step and during treatment, the water should be kept as clean as possible, with additional changes every three days. Ampicillin, an antibiotic, should be added to the water of the sick betta. This should be continued for a week after the betta’s eyes return to normal to ensure thorough wellness.

One of the more common betta fish diseases is Dropsy, and it is unfortunately often fatal. Little is known about its causes apart from high nitrate levels and dirty water, but the use of live foods is sometimes suspected. Because it is more probably a sign of other problems than an individual disease, a sick betta with signs of Dropsy should be isolated in water from the tank before its cause can spread to other fish.

Signs include pineconing of the scales, dulled color, sunken eyes, lethargy, disinterest in food, and swelling. The pine cone effect comes from small patches of scales swelling because the fish absorbs water more quickly than its body can eliminate it. Swellings due to Dropsy are most easily viewed from above to distinguish it from typical abdominal swelling, as constipation is most obvious from the side and does not create pineconing.

Of all the bacterial betta diseases, Dropsy is likely the most difficult to cure. Medicating your betta can be attempted to help eliminate the underlying cause, and salt baths are sometimes instrumental in drawing fluids from the sick betta. Penicilin, naladixic acid, and tetracycline are among the possible medications, as are other antibiotics. Because Dropsy is so often fatal, whether or not treatment is attempted is up to the owner. If treatment is decided against, the afflicted betta should be made comfortable with lowered water level and plants to help give air access. Aquarium salt will help ease pressure and discomfort.

The key to avoiding most betta diseases is clean, properly treated water. This cannot be overemphasized. Most betta fish diseases occur when the sensitive fish are subjected to unhealthy conditions. In all cases, familiarity with specific fish makes early identification of problems easiest. A betta kept in ideal conditions, and treated promptly if symptoms occur, has the best chance of a happy life that can last up to six years. If you are unsure whether or not your betta is sick, then I recommend a visit to the nearest betta fish expert that you can find. If you would like to know more about betta care, then you can take a look at my betta care article, and I also recommend that you sign up for my free betta care newsletter, which gives you a step by step instruction on how to care properly for your betta fish. You can sign up through the form below.