Topic: Hi! I am so excited to get my beta fish, but before I do that I have some questions for you. I went to a website and it said if you want to have more than one beta you have to get five female fish. I just want one or two. Is the five thing true?

I also heard that with a female betta you can have another fish like a guppy. I was considering that but I don’t what to harm or hurt the guppy or stress out the betta. Last but not least. Do I have to have a filter in my tank? Thanks for all your help. I hope to be a beta nerd too someday. 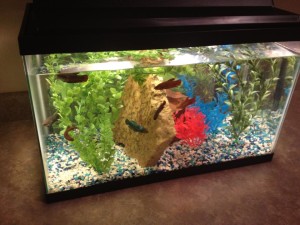 The female betta fish is less aggressive than the male by far. This doesn’t mean that the female doesn’t have aggression though. For the best results, you should keep more than 3 of these fish together at once. The main reason is because they do have aggression and have a tendency to push the others around. The most ideal setup would be a 10 gallon aquarium with lots of plants.

Even if the plants are fake it still gives them room to hide from each other when being chased. The heavier planted your tank is the safer your betta fish are of dangers. Females will still push each other around and kill each other. I would advise getting around 4+ betta fish in a 10 gallon tank and you will have an awesome setup. I literally have a 10 gallon tank with 7 female betta fish in it right now and love it. This picture is of my tank!

Posted by Keith T.
Are you telling her that if she doesn’t have at least 4 females together that they will kill themselves? That doesn’t seem completely correct because I have had many tanks with only 2 female bettas together and they did just fine. The problem that occurs here is that each and every individual fish is different in personality than what we think they are. I have seen some of the nicest male betta fish even. I put him with 6 other females and they did just fine. PS: What is your favorite filter to use with these awesome fish?

Reply from Chris W.
No, I simply said that the fish would do the best with a larger group like 4 than with 2. We have all seen the stories of fish that are “different” as far as personalities go. These stories only come from people who ‘test’ the boundaries though if you think about it. That story you speak of where a male is introduced with 6 other female bettas… Why was the person doing it in the first place. Simply to do that test to tell people.. Fish get hurt when people start these experiments and it pisses me off frankly. If we keep the rules basic for what beginner aquarists should do as far as roommates and tankmates.. than we will have less fish die at the end of it all. You should also be careful when you feed them their food that they don’t get too aggressive.

Posted by Keith T.
I get what your saying and know where your coming from. As a beginner standpoint I also feel it is good to stick to some basics. I agree with your saying.