I just got a new betta fish and have it in a flower vase until I go get a new tank tomorrow. What size would you recommend that I get for my betta setup. It is just one male and no other fish. Are there friends that can go with the male betta fish or no? 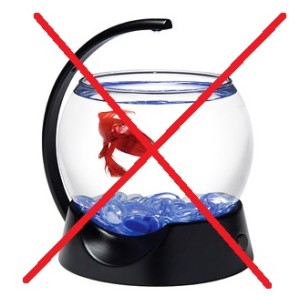 Reply from Chris W.
I would advise going with a 5 gallon tank at bare minimum. That’s a very common size because its not too tough to move around by hand and you can do water changes very easily by just pouring the tank. If you want my personal opinion though I would tell you to go with a 10 gallon tank. It will be easier to keep clean cause it is a larger body of water and the fish will be super happy as if that’s a lake for him to swim in.

Bobby U.
As far as tank mates, I would say no because it is a male betta. These fish are highly aggressive and almost always kill the opponent or die themselves of anxiety of the fight. You could get something that the betta may not mess with though like a crayfish. I’ve never seen that before but maybe someone else can help you on that.

Reply from Grant O.
The crayfish would be all cool until the crayfish killed your fish. I think they strike fish from time to time if I’m not mistaken. I would just stick to the betta and maybe start harvesting brine shrimp for him to feed on. They really do love brine shrimp and blood worms and such. Promise me you won’t fee him those crappy pellets that people always buy. A premium fish eats premium food.

Vicky R.
I was wondering the same thing about roommates. Isn’t there some fish out there that gets along with this beautiful fish. I wonder if a female and a male would be ok.

Reply from Admin
We have touched base on the fact that male betta fish don’t get along with other fish. Hopefully we don’t waste anymore time going through this again. What happens is people start messing around and experimenting and fish die through the process. I have had only one male betta in my life that got along with other fish. But he late does of anxiety .. So it was still a failed mission and I lost a good friend through it.

Reply from Vicky R.
I know I know.. I was just wanting to thrill myself that he could have friends but you are right and we always fool ourselves on the fact that these fish can have roommates when they really can’t. You read stories online but the people always seem like they don’t care of the fish dies an I’m not on that scenario.. I would cry my eyes out if I caused my betta to die.

Casandra R.
I once had a male betta that got along great with a goldfish of mine. I know that sounds stupid but its totally true.

Reply from Admin
Ughhhhhhhh! Really.. A goldfish. This post is now closed. No more talking about make betta fish roommates that do not work.