Betta Fish, also known as Betta Splendens or Siamese fighting fish, originate from Asia, more specifically, Thailand, Malaysia and Cambodia. Facts on these fish can help you to better understand them. Betta Fish are a popular freshwater aquarium fish, perhaps even the most popular type of freshwater aquarium fish in the US. Originally, Bettas were given the official name of Macropodus Pugnax, after Doctor Theodor Cantor examined them. 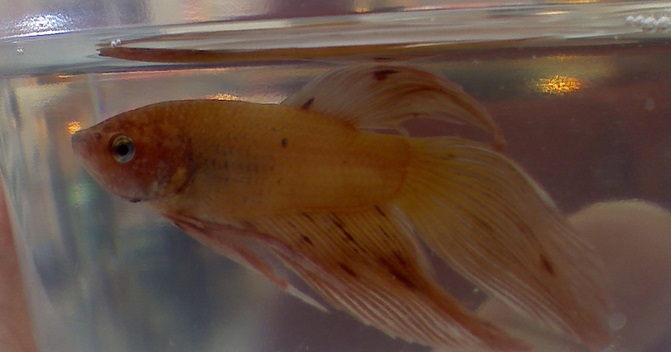 That name did not last for long however, because in 1909, they were once again renamed as betta splendens and since then, that has become the accepted name for betta fish.  It is thought that the name betta was derived from an ancient Asian warrior tribe named “Bettah”. It is thought that they were compared to the warriors of the “Bettah” people, due to their violent nature.

The History of “Japanese Fighting Fish”

Betta splendens first reached the United States of America in 1910 and since then, they have become the favourite fish to collect for freshwater aquarium fish owners. This has led to the growth of the commercial breeding industry, mainly present in the United States and Japan.

Betta breeding, can be very profitable for companies, especially companies who choose to supply fighting bettas, which are usually expensive to buy and often discarded after fights, requiring a constant supply of betta fish. Some people question the morals of betta fighting, which is why betta fish fighting has been made illegal in most US states, along with most of western Europe and Asia. However that does not stop a lot of people and many choose to continue to practice betta fighting, despite the fact that it can lead to a fine or in many states, a third degree felony if you are caught.

A lot of US companies choose not to breed bettas for fighting, which is a good thing in my opinion, because although it may be fun for many people, I think that it is cruel and unnecessary. I believe that you should get sufficient pleasure out of the pure nature of the animals and their fantastic beauty.

Collecting Siamese fighting fish,  was a common theme among many children who lived in places like Cambodia and Malaysia. The Siamese took note of the betta fish due to their aggressive nature and they eventually began to breed them specifically for the purpose of fighting each other. It was common for Siamese men to bet anything from small amounts of money, all the way up to things like their houses and wife on Betta fights. 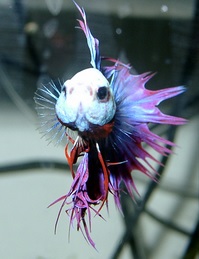 The betta fights rarely ended in the death of a betta fish, but instead ended when one betta fish gave up the fight. In the beginning betta splendens could only last a few minutes in a fight, but once the Siamese decided to breed them specifically for fighting, it was not uncommon for fights to go on for hours before on betta fish backed down.

There are over 50 different members of the betta genus, so strictly speaking, betta splendens is not actually the name given to all betta fish. It is often used interchangeably with terms like betta fish, Siamese fighting fish and bettas. This is because the betta splendens genus has become the most popular species of betta fish, especially with freshwater aquarium fish owners in the US.

Caring for betta fish, is the first thing someone considering buying a betta fish must learn. Betta fish care can be straightforward and fun to learn if you are willing to put a little bit of time into researching the correct way to care for your betta. Betta care consists of a number of different things, including tank conditions, diet and transportation. 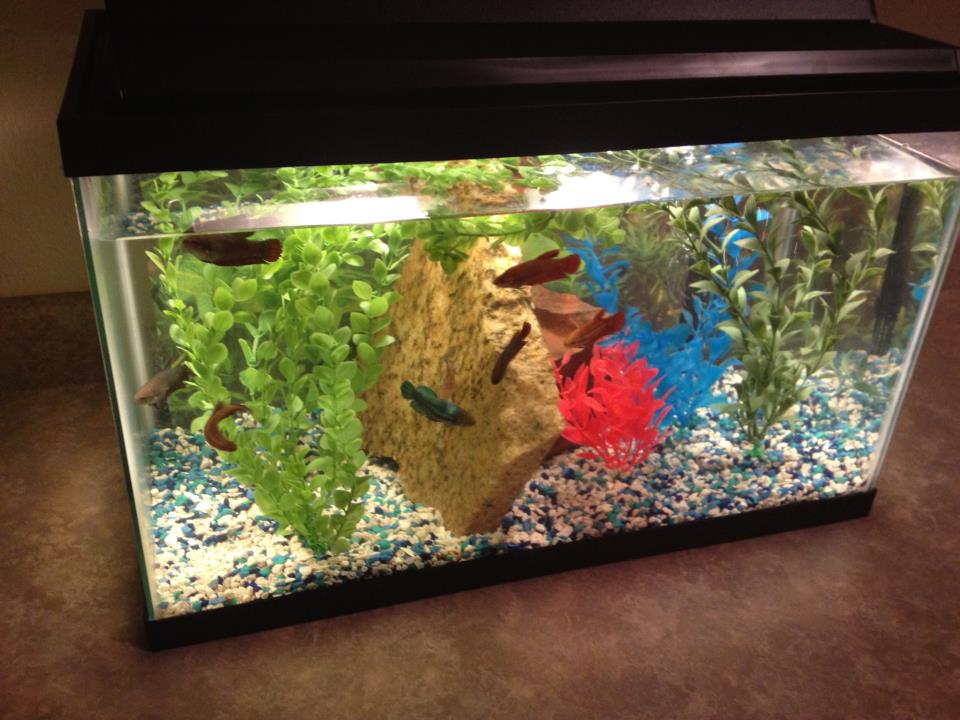 Tank Setup Variables & What to Think About

Betta fish tanks are a great way to liven up nearly any room. I say nearly because, let’s face it, putting a betta tank in the bathroom (read: fish cemetery) seems a little cruel. You may have seen them on dining room tables, in bedrooms, or on kitchen counters. The colorful display of the tank instantly commands attention, and the betta fish’s elegant flow as it playfully swims about is quite beautiful and entertaining to watch.

The guy at the pet store is going to sell you a product known as “basic betta pellets”. These are comparable to you eating survival food everyday. Your fish are going to get super sick of them if maybe not even like to eat them from the beginning. The question of why my fish wont eat is going to always exist when you are feeding them this crap? Betta fish are carnivores and like to eat meat. Look into getting some brine shrimp or dried shrimp or mosquito larvae. They will appreciate it very much.

What kind of tank should I get?

Many people mistakenly think that their betta can be kept in the tiny bowl in which it was purchased at the pet store. If you are considering getting a betta fish, you want to look at betta fish aquariums and tanks that will provide ample room for the fish to swim around even with the presence of plants and any decorative accessories you may add to the environment. Not to mention that it is nearly impossible to keep a bowl like that clean since you can’t really use a filtration system in such a small container. Providing a clean, comfortable, and spacious betta fish tank setup is very important for the health and happiness of your fish.

When comparing betta fish tanks, think about where you intend to set up the tank. How large of a tank will suitably fit within the space? Will there be easy access to electrical outlets? Could it be easily knocked over or tampered with by children or pets? What kind of décor or wood is already present in the room? Answering questions like these will help you narrow down the endless options of betta fish aquariums.

You will also need to consider whether you want just one fish or if you’d like to have more. Betta fish are also called Siamese fighting fish for a reason. They have a sort of marine animal only-child syndrome: they want all the attention for themselves, they don’t like to share, and they don’t play well with others. (No offense to you only children out there. I’m sure you’re all quite lovely and well-adjusted.) You can get a separate aquarium/bowl/tank for each fish, or you can get these super nifty divider things that let you create a betta fish community tank without worrying about any surprise fight-to-the-death matches.
If you have never had fish before and don’t know the first thing about getting a betta tank up and running, the easiest way to get started is to go with a complete betta tank starter kit. The SeaClear 10 gallon flat black hexagonal aquarium starter kit, for instance, comes with everything you need minus fish, gravel, and water. Included in the kit along with the tank itself are color-enhancing betta fish food, a canopy with a built-in fixture and light bulb, an electric-powered filter, a net, two plastic plants, and a water conditioning solution.

The aquarium itself is made of a lightweight acrylic material that is ultra clear and much sturdier than a glass tank. It provides plenty of room for one fish, or can be used as a betta fish community tank, without taking up too much space in the room. While betta fish are freshwater fish, it is still worth mentioning that the acrylic foundation of this particular tank is resistant to saltwater corrosion. So, should you later decide to use it as a starter tank for saltwater fish, you won’t have to worry about it damaging the tank for future use.
I’ve decided on a tank. Now, what?

Another common misconception about fish is that they are low-maintenance or need very little care. While caring for a fish is a lot different than caring for a dog or other types of pets, it still requires routine maintenance that should never be overlooked. Setting up and maintaining betta fish tanks is all about preserving an ecosystem’s delicate balance. Read on for some tips regarding betta fish tank setup.

It’s not as simple as just filling the tank with tap water and dumping the betta in there and voila, instant happy thriving aquatic life. In fact, you never ever want to do that with any kind of fish. First of all, there are chemicals in your drinking water that are harmful to fish. Second, betta fish aquariums need time to build a healthy amount of beneficial bacteria before it is fit for marine life. http://www.globalchange.umich.edu/ecosystem

Put the tank where you want it to be displayed and make sure it is out of direct sunlight. Layer about two inches of smooth gravel, marbles, or sand evenly across the bottom. Make sure your filter, heater, and thermometer are suitable for the size of your tank. This will be clearly indicated on the packaging. Set them up according to the directions on the packaging, but don’t turn them on yet. Now, you can set up any bubble stones or strips, fake plants, and other decorations. Use only smooth plants and decorations. Betta fish fins are delicate and rough materials can easily damage them.

Now it’s time to fill the tank with water and put in the specified amount of conditioner. Then, go ahead and place some freshwater plants around the tank, using whatever bedding you chose to secure them in place. As mentioned, you can mix in some fake silk plants to create a more exotic look (stay away from plastic!), but you definitely want some real plant life in there as plants make a substantial contribution to the water’s oxygen level and the balance of the ecosystem as a whole. And remember, plants need lighting, so a tank hood with a built-in light is ideal. You can put lights on automatic timers so that they go off on their own at night.

Turn on the bubble device(s), filter, and heater. Set the heater to a temperature between 75 and 80 degrees Fahrenheit. Let the completed tank sit for a couple of days to allow the unwanted chemicals to subside and the water to reach optimal pH and nitrate levels. Now, you can finally go pick out the prettiest fishy you can find and introduce him or her to their new home.
Ammonia is the worst enemy of a betta fish community tank. Ammonia is naturally produced by the fish itself as well as by excess food and decaying plant matter.

High ammonia levels are hazardous to the health of your fish. Plus, the water will start to look really gross and then it totally defeats the purpose of having this awesome betta fish tank setup if nobody even wants to look at it. To maintain water clarity and keep ammonia levels down, change about 15 to 20 percent of the water in the tank (no more, no less) every two weeks. This minimizes the stress placed on the fish and prevents taking out too much good bacteria. Allow the new water to sit in a clean bucket for at least 24 hours before adding it to the tank.